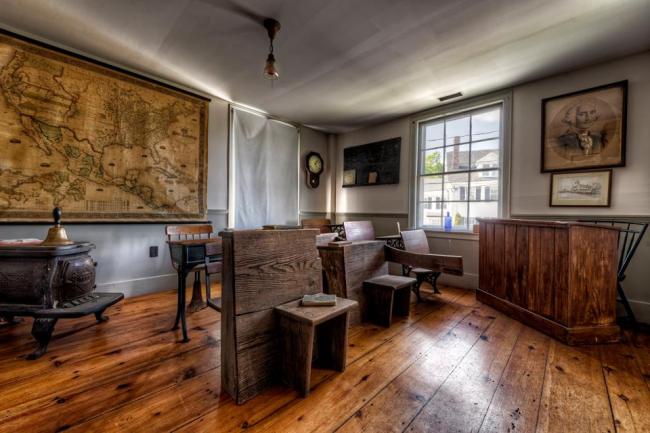 Terri Harlow was on her hands and knees, cleaning a section of the floor in the front parlor when she realized she wasn’t alone. A small cat approached her, twitching its tail in a manner that made her believe it wanted to be petted. Before she could even reach for her camera, the cat disappeared before her eyes.

As the curator of the historic Amos Blake house in Fitzwilliam, New Hampshire, as well as the founder of Conscious Spirit Paranormal, a local paranormal investigative group, Terri has witnessed more paranormal phenomena than she can fit into a conversation. Every room in the 1837 house has a story.

“There are eleven confirmed ghosts here, not including the cat,” she said with a sly smile, as she led us from room to room in the white clapboard building.

When I was invited to tour the building with local photographer extraordinaire, Frank Grace, and his father (also named Frank), I jumped at the chance. Frank told me that we’d be meeting Terri Harlow at the museum, but I didn’t put two and two together until she opened the door and greeted us. I met Terri years ago at an event at the Haunted Victorian Mansion and was thrilled to see her again. After we had a chance to do some catching up, she took us on a tour of the building, explaining each room as we went along. It was quickly apparent that the house doesn’t whisper with history – it screams with it. Every room in the perfectly preserved house is filled with antiques and artifacts from the days when Amos Blake walked the land.

Amos Blake was a prominent man in Fitzwilliam in the mid-eighteen hundreds. Besides being a lawyer, he was also a community leader and state legislator. He purchased the house in 1865 and used one of the front rooms as an office for his law practice. When he died in 1925, his son Leroy transferred his insurance business to the home and assumed residence.

While Amos was a pillar of the community, his son Leroy was better known as a ladies’ man, as well as a hoarder. “When he died in the 1960’s, this room was filled with stuff. There were paths through all of it,” Terri told us as we walked into the kitchen area. “Most people think hoarding is something that only happens today, but it happened back then as well,” she added.  Leroy Blake was proof of that.

We continued on to the front parlor, where Terri once saw the ghostly cat, and then to Amos’s original office space, outfitted with his original desk and furniture. I was amazed at how much of his original possessions remained with the house. It was like stepping back in time. His desk sat in front of the window, outfitted with tools from the trade. An old telephone sat beside an old ink well, items that actually once belonged to the Blake family.

Terri then took us up to the second floor, which was once divided into apartments. Each room was a treasure, filled with antiques from the era. One room was filled with old toys. Cribs with creepy life-like dolls occupied the space, along with a glass showcase filled with delicate old play things.

“A man from New Jersey donated these two bears,” Terri said, showing us two elderly teddy bears in the glass case. “He comes by on occasion to visit them. Isn’t that the sweetest thing? I love it,” she said with a smile.

“Has anything paranormal ever happened in here?” I asked her.

Terri got a gleam in her eye as she showed us the mantle above the fireplace. “I put several toys on the mantle and came back a few hours later to find them way over there on the floor,” she said, pointing to an area nearly six feet away. Considering she was alone in the building at the time, this was interesting information. Other items in the house move as well. A catnip toy brought in for the ghost cat is frequently found in various places in the house, as if a cat had been playing with it. A shadow person was also photographed in this room in the corner. When the paranormal television show Ghost Hunters came to shoot an episode there in 2009, a chain in the current country store moved on camera. While several people have debunked the phenomena, stating it was caused by an investigator walking through the room, Terri was quick to tell us that it’s something that has happened many times since. The building is haunted. It’s no surprise that items often move on their own. 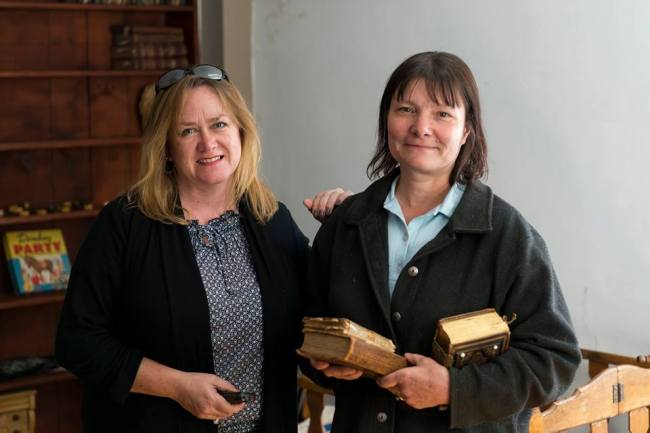 Knowing it was a haunted location, I had my digital audio recorder running for the duration of the tour. As we stepped into the hallway, I got my first EVP. An EVP is a ghostly voice that is captured on a recording device but isn’t heard at the time it was recorded. Capturing one or two during a standard investigation is good. Finding one during a daylight tour of the facility was like hitting a jackpot for me.

A voice said, “behind you.” Click on the link below and it will take you directly to my Soundcloud page where the EVP is located.

The next room we walked into was a room dedicated to a local doctor. Dr. George Emerson practiced medicine in the town for many years during the earlier part of the last century. After he died in the late 1950’s, his son donated his equipment to the museum, including an old wheelchair, medical instruments, and medicine bottles, including several labeled snake oil, and liver pills. An odd doll was propped up on a shelf. I asked Terri about it, and she explained that it was used to teach new mothers how to care for their babies. I captured an EVP during this time, as well.

Terri showed us a room set up as a bedroom, with old-fashioned stenciling on the walls and an antique rope bed centered in the room. Frank marveled at it, telling us that is where the phrase “Good night, sleep tight. Don’t let the bedbugs bite,” came from. Before bedtime, they would tighten the ropes on the bed to make the mattress firmer. I attempted to conduct an EVP session in the room, but was later dismayed to learn that my recorder was mysteriously turned off three seconds into the recording.

Another room on the top floor was a costume room, with beautiful dresses and outfits from every era of the late eighteen hundreds and early nineteen hundreds. Terri would like to make the room into a girl’s bedroom and is looking for a historic canopy bed. If anyone has one they’d like to donate, she’d be delighted to take it.

We also toured a room dedicated to the Fitzwilliam Band, with various instruments and uniforms displayed around the room. Terri caught my attention when she said that the band traveled all around New England and had visited Gardner, Massachusetts frequently. Since I’m currently writing a book about the S.K. Pierce Mansion in Gardner, it made me wonder if the band every played there, as well.

Next door was the military room, with artifacts and uniforms from the various wars, including the Revolutionary War, Gettysburg, and World Wars I and II. In the corner was a cape that was worn by a general to George Washington’s commemorative service in 1800, one of the oldest artifacts in the building.

One of the most interesting rooms was the schoolhouse room. Over the course of the past decades, the museum has collected an assortment of old school desks and antiques, including a photo of George Washington, an old wall clock (placed at the back of the room so the children wouldn’t be preoccupied by it), and a teacher’s desk. It wasn’t difficult to imagine children from the past sitting at the desks, watching the teacher write the day’s lessons on the chalkboard. Once during a tour, Terri heard sounds coming from the room and returned to find several lines drawn on the chalkboard. 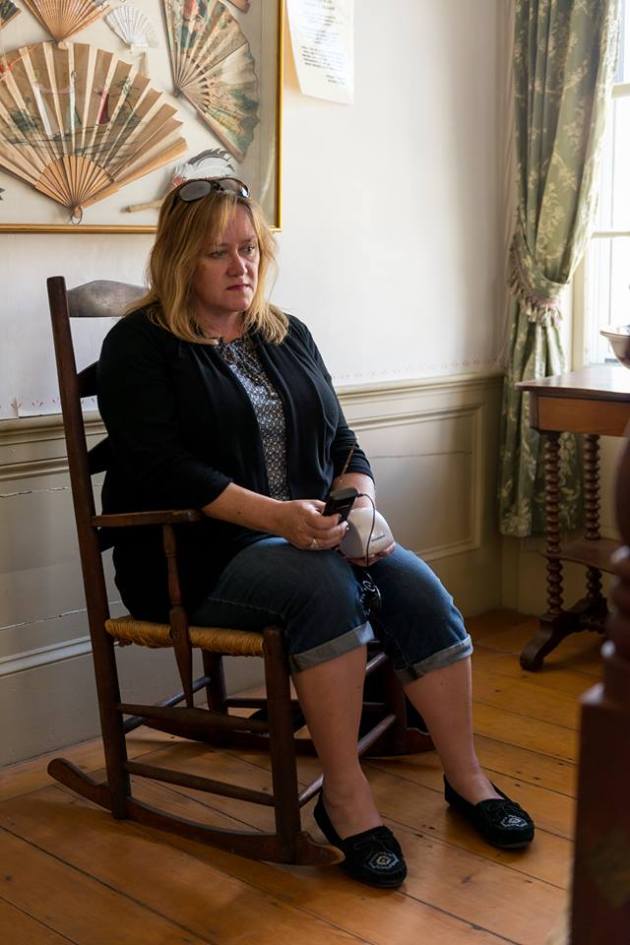 After the tour was concluded, I excused myself and wandered off by myself up to the attic. According to Terri, the attic is a hot spot for paranormal activity. I soon found this out firsthand. Being a sensitive, I had been picking up on the resident entities during the majority of the tour. I pointed them out to Terri, who is also a medium, for confirmation. In the attic, I felt there was a man, a woman, and several children. She later confirmed that a grumpy man is known to linger in the corner near the stairs, and that a woman who loves to dance is often heard there, as well. I turned on my Spirit Box to see if any of them were willing to talk to me. For those of you who don’t know what a Spirit Box is, it’s a modified radio that scans quickly through the stations. The theory is that the ghosts can use the white noise to speak. Some controversy surrounds this piece of equipment. Critics feel the responses are due to stray radio signals. While I agree that there are often bits and pieces of radio voices that come through the speakers, I’ve captured several responses that are far too relevant to be coincidence. Here is one of them:

I asked them who their favorite tour guide was. Here is the response:

After I finished up in the attic, I wandered back down to the second floor. While Terri and tour guide, Jennifer, sorted through old clothing in the office area, I sat and chatted with them. Little did I know that I’d capture another EVP. They were looking at an old hanger, trying to figure out how it worked when I recorded this voice. I can’t quite make out what it’s saying in the beginning, but it says “come look at that.”

The Amos Blake House was a treasure trove of historical artifacts. I highly recommend it to anyone with an appreciation for history and/or the paranormal. The tours are free and full of fascinating information. They are open the first and last Saturdays of the month from 1-4pm (Memorial Day through Labor Day), and are open every Tuesday from 3-5pm for research or scheduled tours. Twilight tours can also be arranged. For more information, please visit their respective links: