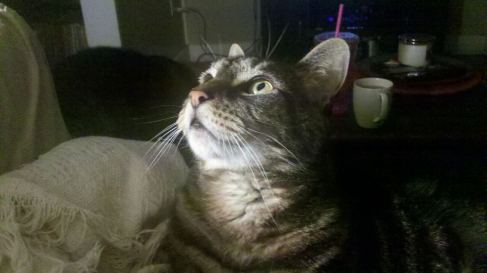 The dogs knew the house was haunted long before the owners did. Wendy and Nina, two tiny white Maltese dogs, would stand at the bottom of the grand staircase at the Victorian mansion and growl.

Edwin Gonazalez and Lillian Otero had purchased the gothic looking Second Empire Victorian mansion, also known as the S.K. Pierce House, months earlier and were eager to move into their beautiful home. Reports that it was haunted didn’t bother them, because they weren’t believers. This would change in a matter of months, but the dogs were one of the first indicators.

“They would wake up in the middle of the night, growling at the hallway, absolutely fixated on something I couldn’t see,” Edwin said. He’d open his eyes to scan the dark hallway, afraid of what he might find. On several occasions, he saw a black shadow mass move across the doorway, blocking out the lights in the hallway.

Can our pets actually see ghosts?

“Our friend Ben caught her on camera, reacting to things that were happening upstairs. She would be sleeping soundly, then would wake up and stare at the third floor stairs just before something would bang or bump,” she said after touring the mansion with co-founder, Chris Cox.

“She continues to sense things. I catch her watching something as if she’s watching a tennis match,” she added.

Are they seeing or hearing something we can’t? While there aren’t any hard facts to support the concept that dogs and cats can see ghosts, it has been documented that they do have much keener senses, making one wonder what they are capable of picking up on.

While it’s not proof, their vision is very different from ours. It is geared towards movement to assist them in hunting, also allowing them to see better in low light situations. Cats also have a better grasp on colors at the red end of the spectrum, allowing them to differentiate between blues and violets better than we can.

Also consider the use of full spectrum cameras on paranormal investigations. Researchers using these cameras, which photograph a broader array of the color spectrum than what can be seen with human eyes, often capture strange shapes and anomalies in the photos. Is this what our pets are seeing?

And they can also hear better than we can, lending more truth to the concept.

A dog can detect sounds that are well beyond the spectrum of human hearing. While humans typically hear sounds from 12Hz to 20,000 Hz, a dog can hear nearly four times greater, in the 40Hz to 60,000 Hz range. If you don’t believe this, just blow on a dog whistle or download an app for your smart phone and test it yourself.

When I tried this, I was dismayed to discover that I could only hear up to 12,000 Hz. But when I pressed the button at the 20,000 Hz range, every pet in my house sat up to look at me. Is it possible that spirit communication transpires in a frequency that is either above or below the range we can hear?

It has long been speculated that ghostly phenomena exists at a different plane of existence. Researchers collecting EVP’s (Electronic Voice Phenomena) will often record spirit responses on digital recorders that cannot be heard by human ears at the time they are recorded. A true EVP response will not be heard at the time the question is asked, but will be captured on a digital recorder, suggesting that spirit communication is conducted at a higher or lower range of the audible spectrum, something we as humans cannot hear, but our pets might be able to.

People have been reporting this occurrence for years.  Nick Mantello, co-founder of the Berkshire Paranormal team, is one of the caretakers for The Houghton Mansion. Located in North Adams, Massachusetts, the three-story mansion has been featured on many paranormal shows, such as the SciFi Channel’s Ghost Hunters, as well as the Travel Channel’s Ghost Adventures. When he visits the mansion for routine visits, he often brings his dog Kronk with him.

“I’ve told people this story about the corner of the Lodge. The dog just don’t like it,” he said. He captured Kronk’s reaction on the video link below.

The stories are endless. Sandra Chase, an avid paranormal enthusiast had an experience she recently shared with me. Her husband passed away in 2007. He was fond of playing computer games and would often pet their dog while he was playing.

“About three months after he passed, the dogs and I were in the living room. Rags was sleeping on the rug. All of a sudden, she got up and went over to the computer chair, put her head under the arm, and started wagging her tail,” she said.

Is this proof of paranormal activity?

Unfortunately it’s not, but it’s something pet owners will continue to pay attention to. Until dogs and cats are able to tell us what they’re seeing, we’ll always be left guessing. Some of us don’t need proof to understand what is happening.

I have a tendency to agree with her.

Joni Mayhan is a paranormal investigator and the author of The Soul Collector, which is an account of her most terrifying paranormal experience.  Find this book and her others on Amazon.com