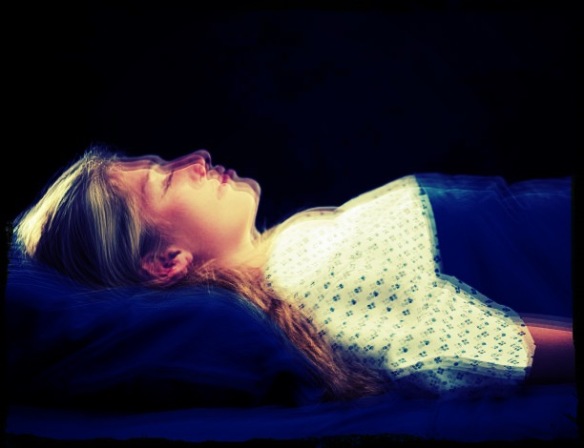 As someone who is sensitive to the paranormal world, I knew something was in my room with me. I climbed into my bed, hoping it would just leave me alone and allow me to sleep, but that wouldn’t be the case.

Shortly after I pulled the covers up to my chin, I could feel it grow closer. Without warning, my body began to vibrate from the inside out.

The feeling was unlike anything I’d ever encountered before. It felt as though I was lying on a vibrating mattress, unable to stop the madness. I tried shifting positions, but the internal vibrations wouldn’t cease. I somehow managed to fall asleep and woke the next morning feeling drained and exhausted. What had happened to me?

I began feeling this sensation more frequently as the days passed. Every morning when I awoke, I felt the same way: as though I’d been depleted of energy while I slept. Over the course of the next few months, I began experimenting and researching the phenomena. What I found was startling. A ghost was pulling energy from me.

While there are actual medical conditions where people feel internal tremors, such as Parkinson’s Disease and Multiple Sclerosis, this wasn’t my situation. I was otherwise very healthy. I was just exhausted from my nightly visits from the other side.

I soon began discovering that I didn’t need to be in bed in order for it to happen. Once while I was at my doctor’s office getting a checkup, my ears began ringing. Since I am clairaudient, having the ability to hear the sounds ghosts make, I knew something paranormal was in the room with me. As the nurse put the blood pressure cuff on me, the entity came even closer, causing my body to begin vibrating. The nurse put a stethoscope to my chest and looked at me with a bit of concern.

“Your heart rate just went up. Are you nervous?” she asked.

I smiled, knowing that if I told her the truth of the matter, I might find myself wearing a straightjacket before the visit ended.

“No. I just had too much coffee today,” I told her instead.

After the latest occurance, I decided to work in earnest on finding a way to stop the body vibrations. As a devout student of the paranormal world, as well as an author, I knew that one of the best ways to protect myself in the paranormal realm involved using my own body’s energy as a shield.

The process is commonly called Shielding. To accomplish it, I started out by grounding myself. Grounding is the method of removing excess energy from your body. While there are many ways to accomplish this, including walking barefoot on the ground outside or hugging a tree, my favorite method can be done anywhere. I imagine a bright white light above me and then I close my eyes. With every breath, I pull white light in through the crown of my head and push the excess energy out through my feet. After several moments of this, I feel physically lighter.

I’ve never had an easy time with visualizations. When I first began attempting grounding myself, I couldn’t hold the image of the white light inside my head. I found that by simply turning on an overhead light, I could actually see the light through my eyelids, something that helped me with the visualization process.

To shield myself, I took that same white light and envisioned it surrounding my body in a bubble. Once my bubble was complete, I followed up by pushing my energy outwards until the bubble was taut. I knew the process was effective because the body vibrations eased up and then stopped completely.

The act of grounding and shielding isn’t something I learned overnight. I had to utilize many of the videos available on Youtube to get me started. Then, I had to practice until I was able to push the ghosts off at will.

If you find yourself exhibiting frequent body vibrations and you are certain it isn’t a medical condition, try my process of grounding and shielding. It can’t hurt and actually might help you fend off the paranormal world around you.

Joni Mayhan is a paranormal investigator and the author of 16 paranormal books. To learn more about her, check out her website Jonimayhan.com.

1 thought on “Body Vibrations in the Paranormal Realm”