Conducting a paranormal investigation at locations that have never been investigated before is a nerve-wracking experience. As a sensitive, I knew there were ghosts at both locations, but could I get them to interact with us? What if I invited twenty people and nothing happened. As it turns out, I didn’t need to worry. 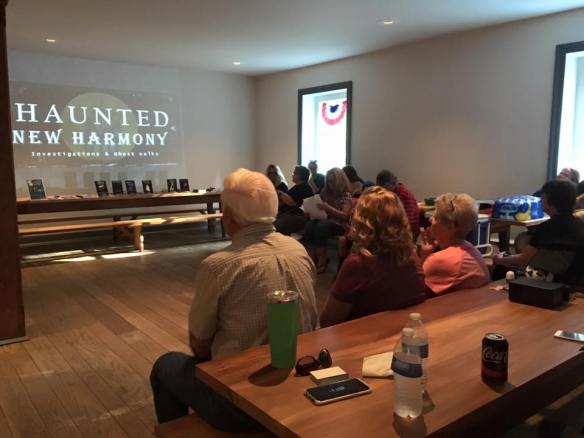 The night was interesting, to say the least. After a paranormal and history presentation, we divided up into two teams. One team went with me to the Fauntleroy Home, while the other team stayed with Billy Miller, the founder of Southern Indiana Paranormal Investigations (SIPI), at Community House #2. After two hours, I returned to Community House #2 and brought Billy’s group back to the Fauntleroy Home for round two.

The Fauntleroy Home has a long history of paranormal activity, beginning with the first ghost sighting in 1848. Over the years, tour guides and visitors have experienced strange happenings. Full body apparitions have been seen, doors have opened and closed on their own and people have been pushed on the stairs.

I could feel the ghosts coming in closer as we sat down for our first session. It wasn’t long before things began happening .

About halfway through one of our EVP sessions, we began hearing a beeping sound. Amanda Bryden, who oversees both locations, got up to investigate and learned that the alarm had turned itself on, even though it was disabled.  She had to turn it back off and call the alarm company. They have tours in this building frequently and this isn’t something that normally happens. She was puzzled by the experience.

During our first session at the base of the staircase, we got some responses on my Spirit Box as we reached out to Mary Emily Fauntleroy. She lived in the house for a number of years, putting her heart and soul into collecting family artifacts and furnishings. After her death, the building was fully restored, returning it back to the 1850’s time period and her collection was removed. Some feel Mary Emily isn’t happy with the renovations. This is something we confirmed during our investigation.

I asked Mary Emily what she thought about the renovations. “I hate them,” was the response. If you listen to both Spirit Box responses (the one above this one and this one) you’ll hear the same voice.

We moved the group upstairs to the second floor. I’ve always felt a heavy presence up there. People who are sensitive often have a difficult time spending any length of time in that room.

We were only in the room a few minutes before I captured the first EVP. We asked if they were happy that people came to visit them in their home. The response was “no more.” We didn’t hear this at the time, but was caught by my digital recorder.

When my second group came to investigate at the Fauntleroy House, it was a completely different experience from the first group. We received far less responses on the Spirit Box, but started getting more actual evps. Interestingly enough, the voice was different from anything I’d heard there in the past. It made me wonder if a member of the group had brought his own ghost to the ghost hunt.

Here’s another EVP that is similar to the last one. I discovered two more that are a bit harder to hear, so I didn’t post them.

On the second floor, we didn’t receive very many responses from the master bedroom, so I moved the group into another room. It was becoming clear that they’d had enough of us. After we received this response, we moved outdoors.

(Above) Joni with the glow sticks hanging behind her

I hung bells on long strings with glow sticks hanging from the bottoms in the doorway. During the first group, the strings never moved, but during the second group, we could see the glow sticks moving in a slow circle. At one point, they appeared to be pushed forward into the room. I also had a pinwheel mounted into a plastic cup. I wanted to provide two “low tech” methods of communication for the ghosts to manipulate. The pinwheel never moved with the first group, but began spinning for the second group. Both low-tech devices were placed in the same exact locations for both groups and weren’t impacted by drafts or AC vents.

While I was at the Fauntleroy Home with my groups, Billy Miller led groups through Community House #2. Like me, he immediately noticed a tremendous difference in the paranormal activity between the two groups.

His first group contained the group full of sensitives and mediums and the building was nearly explosive with activity. They heard music playing, doors slamming and phantom footsteps. As I listened to the audio they recorded, I too could hear the music. It was too faint to post, but I could make it out with my headphones on.

They felt that the first floor and second floors were the hotspots for activity. Billy placed a laser grid in the second floor hallway to see if any shadows crossed the beams. Several people sat and watched the hallway, while the rest of the group conducted an EVP session in a dormitory room. During one of their sessions, they watched as several of the lights blacked out momentarily as though someone passed through them. 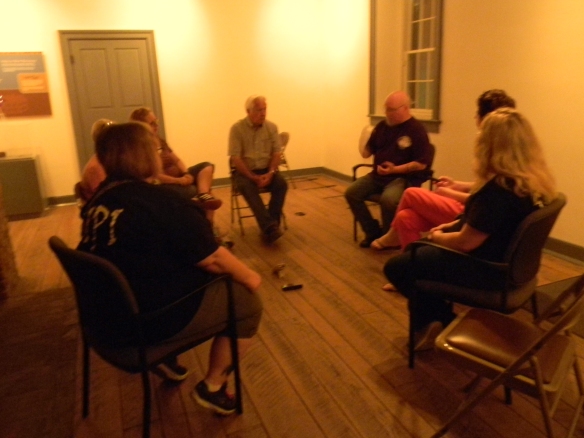 While in the second floor dormitory room, one group member suddenly felt a lot of physical pressure wash over her. Then she became cold, with goosebumps popping up on her arms before she unexpectedly became overwhelmed with a sense of sadness and began crying. This was strange for her, because as she said, “I’m not someone who’s easily subjected to crying and having fits.” Shortly afterwards, she started feeling increasingly hot before she felt better. Seconds after she began feeling better, another group member jumped as she felt someone touch her.

Another member had two strange experiences at Community House #2. When he sat in a corner of the third floor where Billy feels there is a portal (doorway to the other side), he felt as though thousands of fingers ran down his body. The sensation was so strong, he was forced to get up and move to another area of the room. It wasn’t his only experience though. Earlier in the evening, he also reported seeing a little boy with a white shirt and hat standing in the doorway. He could only see him from the waist up. He appeared to be very sad. “I could feel his sadness too,” he said.

The Community House was quiet for the second group. They didn’t hear the same sounds the first group experienced. I had both groups carry one of my digital recorders with them and I listened to the investigations, looking for ghostly responses. Surprisingly, the first group filled with mediums didn’t receive any EVPS, but the second group received one that made me very sad.

They were attempting to communicate with a Frenchman named George Gerand who supposedly committed suicide on the second floor of the community house in the 1800’s. He was having a difficult time making ends meet and was waiting for a letter to arrive with funds to clear his debt. When the letter didn’t arrive as expected, he hung himself. Sadly, shortly after his death, the letter was found at the post office. It had fallen off a table and was lost on the floor until it was later discovered.

As they were leaving the area, they said, “Bonjour,” and received the response, “Help me.”

All in all, it was a successful event. Everyone had the opportunity to experience a true paranormal investigation and quite a few of them had personal experiences they couldn’t explain.

My hope is that as time goes on, the ghosts at both buildings become more comfortable with us and our equipment and provide more responses. Hopefully, through continued communication, I will be able to earn their trust and provide them with the help that they need to find their way over to the other side, where they’re supposed to be.

We’ll be hosting more investigations there in August, September and October of this year. These events fill up quickly, so reserve your spot before they’re all sold out.