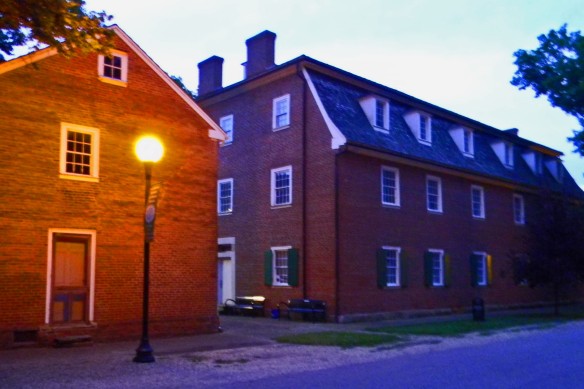 (Above: Community House #2 at dusk)

It’s always such an honor to investigate historic buildings. As we move through the rooms, we always keep that history in our minds, knowing that many others passed through this space before us. We also hope to learn something from the souls that still reside there, giving us a glimpse into the lives they once led.

We had a small group for our first investigation, which meant we could all stay together and not have to separate into two groups. It also gives us greater opportunity to communicate with the souls of the building. They are often less intimidated by smaller groups so we were hopeful to make contact with them.

We started in Community House #2, which was built in 1822 by the Harmonists, the Utopian society who founded the town. The building was originally used as a dormitory building for the younger members of the group, but over time has been used as a furniture store, school, print shop for the local newspaper and a rooming house. Many lives have passed through those doors, so we weren’t sure who we’d be talking to.

As we settled into our first EVP session on the first floor, we all began hearing footsteps and noises upstairs. We turned on the Spirit Box soon after and immediately began getting responses to our questions. We asked if they could talk to us and a male voice said, “Speak your tone.”

Someone else asked if that was his favorite room and the same male voice said, “It was mine.”

After thirty minutes, we moved to the second floor to a room that had once been used as a dormitory room. The room had a second room that branched off of it. I put my Mel Meter in the doorway and turned on the REM mode. If anything came close to it, it would light up. I’ve only had this go off several times over the five years that I’ve owned it, so I was surprised when it immediately began flashing.

Not long afterwards, we heard a door slam down at the end of the hallway, even though all the doors are closed and locked.

We then brought out the dowsing rods for everyone to try. Here’s what we learned:

Fleeing shadows are often seen in the hallway, so we put two people in the hallway at a time. I turned on my laser grid so they could watch for shadows. If something broke the grid, they would clearly see it. 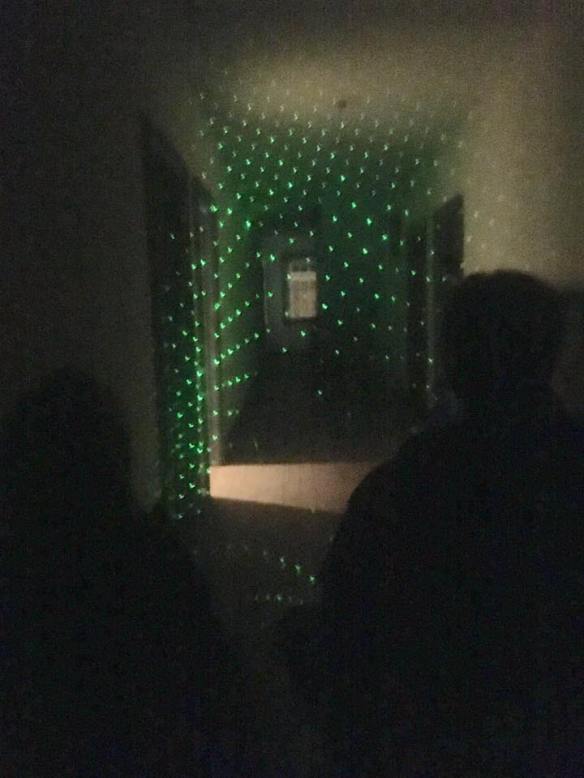 (Above: The laser grid set up in the second floor hallway in Community House #2 )

The first two people didn’t hear or see anything, but the second two heard what sounded like a broom sweep right behind them

(Above: Amanda Bryden talking to the group on the third floor of Community House #2)

After a half hour, we moved to the third floor.

Because we’ve always had good luck with the Spirit Box up there, we turned it on immediately.

The responses were interesting because two Civil War soldiers worked on the third floor in the printing office. The other responses were curious, but might make more sense later. Amanda Bryden, who is in charge of the buildings is going to research the names to see if they fit into the town’s history.

(Above: The Fauntleroy Home)

After a short break, we walked down the street to the Fauntleroy Home.

I’ve always said the Fauntleroy Home is the most haunted house in New Harmony. Many people have had terrifying experiences there, something we’ve witnessed firsthand. While no one in any of our groups has been pushed or scratched, several people have been touched and we’ve had many personal experiences we can’t explain.

The Fauntleroy Home was built by the Harmonists in 1820. It was the 53rd house built in town and has had a long history of people residing there. One of the primary ghosts that we’ve frequently interacted with is Mary Emily Fauntleroy. She purchased the home in the early 1900’s and turned it into New Harmony’s first tour site. The home was her entire life and she dedicated her life to preserving it and telling it’s history. Unfortunately, she wouldn’t get to live our her life there. After owning her home for a number of years, she had a difficult time making ends meet. The house eventually was turned over to the state and they promised her she could remain there until she died. When WWII broke out, the state ceased operations and kicked her out. She moved next door to live with her brother and his wife until she died. I’m fairly certain she returned to her beloved home as soon as she died.

(Above: Amanda Bryden talking to the group on the first floor of The Fauntleroy Home)

We usually communicate with Mary Emily on the first floor, but it was unnaturally quiet. Amanda was talking about the renovations that were done there years ago and without warning, the pinwheel in the middle of the floor slammed to the ground. It didn’t fall over. It was thrust over to the point where the cup that was holding it was bent. We all jumped when it happened because there was no logical explanation for it. It was as though someone slammed it down in anger. 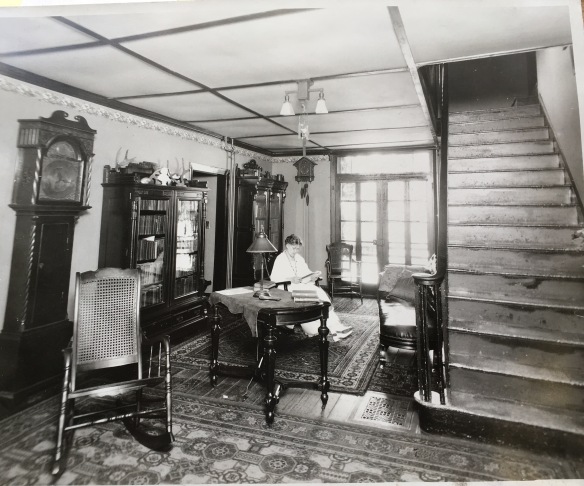 (Above: A historic photo of Mary Emily Fauntleroy sitting in the same spot where we did our first EVP session at The Fauntleroy Home)

After a few minutes, we moved up to the second floor. 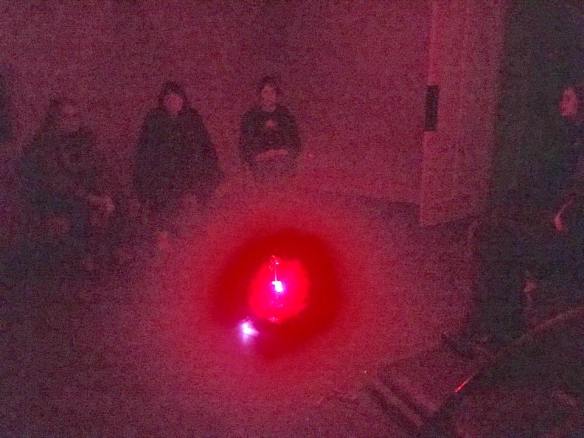 (Above: Our group on the second floor of The Fauntleroy Home with the pinwheel in the middle of the group. The red light is from a flashlight)

The second floor bedroom is always active and it didn’t disappoint us this time either. We used a variety of equipment, including a Spirit Box, the Mel Meter, a KII meter and a flashlight. During our first session, we employed the flashlight. If it is set in between the on and off position, the ghosts can easily utilize it to respond to our questions.

We turned on the Spirit Box and got a few interesting responses:

I can’t handle listening to the Spirit Box for long periods of time, so I turned it off. I asked if it annoyed them too and the flashlight immediately came on.

Shortly after that, the alarm started blaring. It was apparent they were done with us. I always find it astounding when the ghosts turn on the house alarm. It has an on and off button. Someone has to switch it over manually. Apparently one of the ghosts in the house is fairly high tech. When Amanda went downstairs to turn off the alarm, one of the ghosts followed her. I could feel it, but also asked and the flashlight came on immediately, giving us confirmation.

Crystal and I both felt like there was a new ghost there. We identified him as a young male who died recently. Crystal thought he died from drugs. I felt he died from a car accident. As it turns out, we were either both wrong or we were picking up on different ghosts.

(Above: Joni and Crystal Folz)

Crystal felt that he was pacing, agitated and anxious. At that moment, we recorded an EVP that said, “Kill.” It’s very faint and you can only hear it with headphones, so I didn’t upload it. Still though, hearing it gave me chills. What did this mean?

We began using the dowsing rods to attempt to get more information, but I’m not certain we were getting the right story:

This was interesting to us because Crystal and I visited the Chadwick house last year. While we were there, Crystal picked up on a young man who hung himself, which was something I later confirmed. We began wondering if that was who we were talking to. I began talking to him about crossing over. As if in confirmation, the light came on. At that moment, I immediately began feeling a tingle in my ankles that is a sign that someone wants to cross over. I felt it move through me and out the crown of my head. Someone crossed over. I wasn’t sure if it was him or someone else, but one of them moved on. 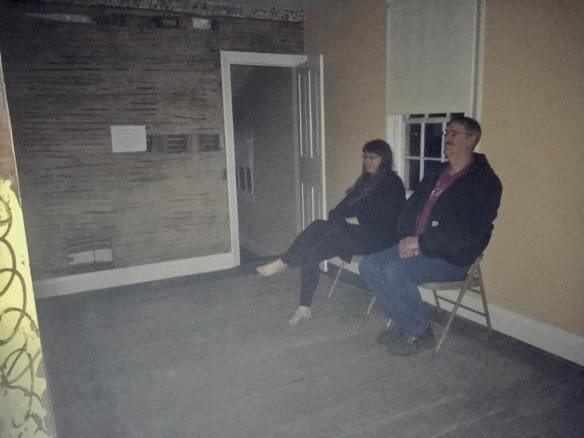 (Above: Crystal Folz and Duanne Wittmayer sitting in the small bedroom at The Fauntleroy Home)

We moved to the basement. It was the first time we’ve actively investigated the basement. I kept feeling a strong sense of slaves in the basement, something that Crystal had picked up on last year when we visited the basement. We then began talking about how New Harmony was formerly a sundown community. People of color weren’t always welcome in town. Amanda shared a story from the turn of the previous century when a group of African-American musicians were in town to perform and missed their train out of town due to weather. Fearful for their safety, some kind people locked them inside Thralls Opera House for the night to keep them safe. The fact that Crystal was feeling slaves in the basement wasn’t completely out of context. Robert Henry Fauntleroy, who moved into the house in 1839 formerly owned a plantation in Virginia and sold/freed his slaves in order to come to New Harmony. At least one of the freed slaves came with him because she’s referenced in the book The Old Fauntleroy Home.  It was possible they roomed in the basement.

The night’s investigation was interesting, but it left us with more questions than answers. Who had we been talking to all night?

We will continue to investigate these historic buildings and will hopefully learn more about their history as time progresses. I was thankful, as always, for the opportunity.

Thank you to Amanda Bryden for your tireless hours, to Crystal Folz for stopping by after conducting a rainy Ghost Walk, and for everyone who attended.