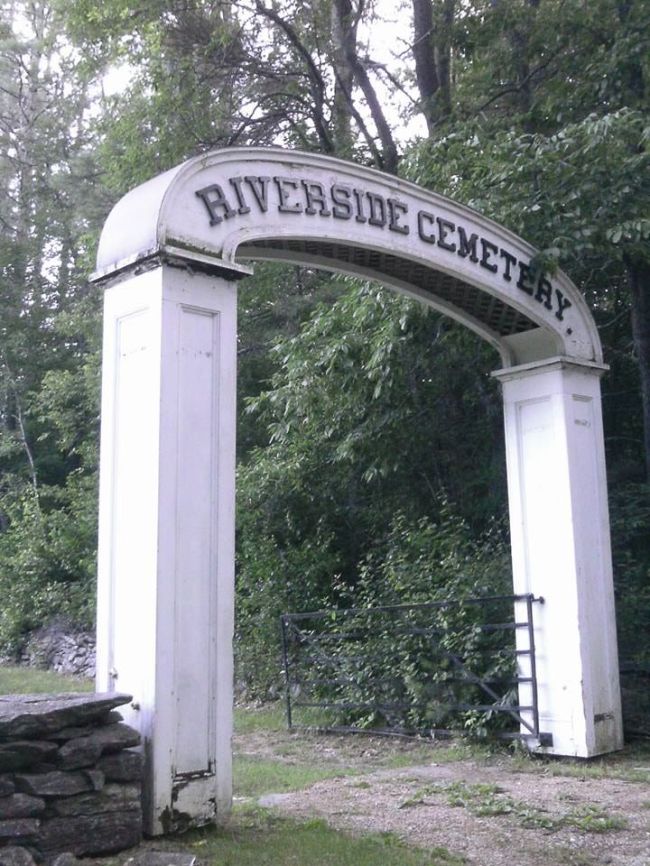 Riverside Cemetery is nestled in a forest at the end of a one-lane dirt road in the heart of a ghost town. It is both haunting and haunted, two traits that make it hard to forget.

My friend Sandy and I stumbled across it almost by accident several years ago as we explored the dirt roads that laced through the woods just outside Barre, Massachusetts. Somewhere in the wooded acreage, the remnants of the lost town of Coldbrook Springs could be found. We hoped to find an old foundation, but what we found instead was a piece of encapsulated history.

Coldbrook Springs was once a bustling town with two hotels, a bowling alley, a blacksmith shop, post office, billiard hall, a box mill, school, and nearly 35 houses. It was removed in the 1930’s as part of the Quabbin Reservoir project. The state bought all of the buildings and demolished them to provide a clean watershed for the Ware River, which flows into the Quabbin Reservoir and provides drinking water to Boston and its suburbs. People were relocated to nearby towns of Oakham, Barre, and Hubbardston, and the town simply ceased to exist.

Besides a few foundations, the cemetery is virtually all that remains of the old town. We walked the grounds, taking in the mixture of old and new headstones. Birds chirped in the distance as the wind rustled through the tops of the tall pines. At the back of the cemetery we found a monument to the Naramore children, who were killed by their own mother in 1901.  We spend a quiet moment reading the inscription.

Poverty stricken and living with an abusive husband, Elizabeth Naramore went to the town for help. When officials visited the residence, they determined that the children would need to be put into foster homes. Before they could do that, Elizabeth killed them, from oldest to youngest, and then attempted unsuccessfully to commit suicide. A monument was erected in the 1990’s to remember the lost children. It’s hard to stand there and not feel a rush of emotion. Over time, the stone has gained a collection of toys and small cars, left by saddened visitors.

As we walked back towards the entrance, I was drawn to a group of three tombstones.

They were old and faded, the words difficult to make out on the worn slate stone. The first stone listed the name of a Catherine Sibley, who lived from 1805 to 1874. Beside her grave was the grave of her husband, Captain Charles Sibley, who lived from 1808 to 1849. And sadly, beside his was the grave of their four children. This was what caused me to pause.

They were listed, one after another, telling a heartbreaking story. 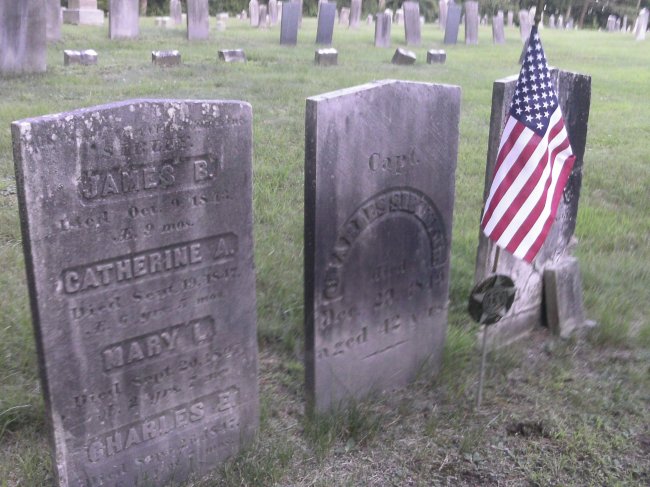 We just stood there, taking it all in, trying to wrap our minds around the tragedy of losing four children, two of whom died within a day of one another.  How did they die? Was there a horrible disease that swept through the area, taking their children one by one, teasing them to believe that one would survive, only to have him taken from them the day after Christmas? My heart went out to their parents.

I am always very respectful of the dead, and with this comes a sense of compassion. As a paranormal investigator, I know that not all of the souls pass on like they’re supposed to. When faced with a tragic death, some lose their way and become earthbound. We wanted to make sure this wasn’t the case. We pulled out our digital recorders and conducted a short EVP session.

The response was heart wrenching. “Yes, Heaven won’t take me.”

The EVP is faint and must be listened to with headphones on high volume. For reasons I can’t explain, the audio has faded over the years, perhaps from being transferred too many times, or possibly for other reasons. Maybe I was the only one meant to hear it.

After listening to it, I couldn’t stop thinking about this poor family and the possibility that the father was still lingering around his grave over one-hundred and sixty years later. I went back to his grave the following week.

In the quiet of the cemetery, I sat beside his headstone and just talked to him. I didn’t know if he was listening or not, but I wanted to help him if I could. I told him about the natural process of what happens to us after death.

“When we die, we’re supposed to cross over into the white light, moving to the place where we’re supposed to go. Some people call it Heaven,” I said. I looked around at the quiet bank of trees, wondering if he was there, or if I was simply talking to myself. I had to continue though.

My voice sounded like a prayer as I began speaking again. “Look for the white light. It’s right above you. All your family is waiting for you. Call out to them to help you cross through.” I took a deep breath and then added something I hoped would help. “God loves you and welcomes you with open arms. Go find the peace and serenity you deserve.”  And then I cried.

I went back several weeks later to see if he was still there. I turned on my digital voice recorder and asked again. “Captain Sibley, are you still here?” Later when I listened to the recording, all I heard was the sound of birds chirping in the background. If he was still there, he wasn’t responding.  I hoped he’d listened to my advice and found the peace he so deserved.  For insurance, a year later I brought a psychic medium to the cemetery and he crossed over five souls. My hope was that if Captain Sibley hadn’t crossed over initially, that he’d gone when the psychic medium gave him another opportunity. Either way, I truly feel he finally found his way.

The story would have ended there if I’d been able to let it go. Thoughts of the Sibley family haunted me. I couldn’t get them off my mind. I reached out to a friend who has a knack for researching and she was able to provide me with more information.  She filled in many of the details for me, fleshing out the bare-boned tragedy and giving it life.

The Sibleys had a long history in Massachusetts. They arrived in Salem, Massachusetts, in 1629, quickly becoming a very prominent family. They boasted statesmen and soldiers of the Revolutionary War, as well as being prosperous business owners.  An early relative of Charles Sibley’s was Mary Woodrow Sibley, who allegedly showed Tibuta and Indian John how to make the urine cakes used to test for witches during the Salem Witch Trials.

Nearly two centuries later, Charles Sibley was born in 1808, the youngest of five siblings. The family relocated to Barre, Massachusetts while he was a child, setting up a homestead just outside of Coldbrook Springs. When he was 25 years-old, he married a woman named Catharine Brigham who was three years his senior. He was listed as “Captain Sibley” on his gravestone, but no information could be found about any military services. In colonial times, this was often added to the name because of the family’s past military service.

They would lose all but two of their children soon after to dysentery.

Dying of dysentery was a very horrible way to go. An inflammation of the lower intestines would lead to a high fever and painful, never-ending diarrhea. Left untreated, the victim would become dehydrated and eventually succumb to the infection. It is often caused by consuming contaminated food or water, or from poor hygiene.  Charles himself would die two years later from Typhoid Fever, after being sick for eight straight days.

Charles’ wife, Catherine would live to be sixty-nine, dying in 1874 in Boston. Her death certificate listed paralysis as the cause of death, although I’m sure there’s more to the story. Sons, Nelson and Charles (the second) would survive both of their parents. Nelson married in 1870 and died in 1900. Charles married in 1882 and died sometime after 1930 in Highgate, Vermont. His occupation was listed as a paper carrier.

There is still so much I don’t know about the Sibley family, and I’m certain this won’t be the last time I’ll think of them.  One thing is certain, I feel as though I was led to his grave for a reason. Maybe it was just to remember them, like they should be remembered.

Or maybe it was to help.

Either way, I’m happy this family found their way into my life.

Heaven will take you, Captain Sibley. You just have to ask again.

Rest in peace, my friend.

Many thanks go to Marian King for her valuable research. You gave me some much needed closure.