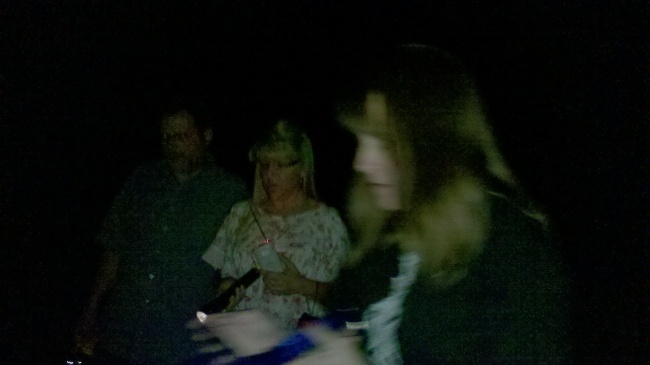 The Purple Head Bridge is a narrow one lane bridge that connects Indiana to Illinois, spanning the Wabash River with barely a hope and a prayer. Driving across it is fairly precarious. While it’s structurally sound, it’s also only one lane wide. Drivers alert one another by flashing their headlights from the other side.

Ghost stories abound, but pinning the legend down to just one story is difficult. It depends on who you ask. Some say that a man tried to commit suicide there, but something went horribly wrong. When he jumped from the bridge with a noose around his neck, he inadvertently decapitated himself. The sight of his floating “purple head” can be seen bobbing around the bridge. Others say Ku Klux Klan activity from the 1960’s causes the disturbances. Some blame it on fierce Native American battles as they defended their land. I’m not certain what the cause is, but the area is definitely creepy. I had one of my most frightening and perplexing paranormal experiences there several years ago.

It all started with a trip to Indiana. My entire family, outside of my children, resides in this mid-western state, scattered mostly in the southern tip. When I return for a visit, there is almost always a ghost hunt set up and waiting for me.

Initially my family and friends were taken back by my ghost hunting, but after hearing about my adventures and sampling some of my tantalizing EVPs (Electronic Voice Phenomena, aka spirit voices) they wanted to experience it for themselves. Through this, I’ve gotten to investigate at several locations I would have never dreamed of pursuing on my own. The Purple Head Bridge is a good example.

Our group was fairly small, consisting of my younger sister, Leah, my old high-school friend, John, and his wife, Melinda. Leah had been ghost hunting with me before, but it would be John and Melinda’s first time. While Melinda was a firm believer in the paranormal, John was decidedly on the fence. He’d have to see it to believe it, which I can appreciate.

It was a muggy summer evening and the cool breeze from the Wabash River was a welcome relief. It had taken us several wrong turns to find the bridge, but once we did, we just stopped at the end and took it all in.

By all accounts, it looked like an old train bridge, but my sister assured me that it sees plenty of traffic since it is the only bridge in the area linking the two states. She told us that we were supposed to drive out to the middle of the bridge and turn off the headlights. If we were lucky, we’d see the purple head floating somewhere near the bridge.

As this turns out, it was nearly impossible and actually quite dangerous. As soon as we drove out onto the bridge, a car appeared at the other end, waiting its turn. Sitting in the middle with no headlights would be a very good way to get rear-ended by an unsuspecting vehicle. So, we moved onto Plan B.

We’d park on the other side and hike down to the river’s edge. Surely if the head floated near the bridge, we could see it from our vantage point below. The only problem with this was the bonfire and party going on nearby. Apparently the bridge is a local hang-out for teenagers in the area. So, we moved onto Plan C.

Being an avid Geocacher (go to Geocaching.com for more info, if you don’t know what this is), my sister knew of a location just ahead where a Geocache was hidden near a single-grave cemetery. She didn’t know if it was haunted or not, but it was worth a shot. We continued down the narrow road. The trees grew in a canopy across the road, providing a dark tunnel for us to navigate through. As we drove, the moon winked through the trees, setting the mood.

We found the area and pulled off the side of the road to park.  We stood for a moment and read the marker. The memorial park was set up for a man named James Johnston, a Lieutenant Colonel in the Pennsylvania Militia, serving in the Revolutionary War.  He apparently survived the battle and lived out his final years in the Indiana/Illinois area. A sign directed us towards a long dark pathway, which would lead us to the memorial park.

The dirt path trailed deep into the forest, providing a perfectly chilling backdrop to what we would soon experience. We walked single-file down the trail, the light from our flashlights bobbed out ahead of us, illuminating swatches of the deep underbrush and the slip of trail that parted between it. A cadence of crickets and cicadas chirped from the depths of the darkness. An occasional car whished past on the main road, just to our right, making us giggle with thoughts of people reporting strange lights in the forest near the haunted bridge. Our smiles soon faded as we reached the end of the path.

The area was no larger than a standard-sized living room. It consisted of a park bench and a single grave, surrounded on all sides by the deep, dark woods. The first thing I noticed was how quiet it was. The trees barely stirred in the breeze and even the crickets quieted down as we arrived. It was as though the very woods itself was holding its breath, waiting to witness what would happen next.

I sat down on the bench, while the others stood nearby.

“I’m going to do an EVP session, so I need everyone to stand very still,” I said. “I’ll ask a few questions and then wait for a response. Then I’ll turn it over to the next person,” I told them. We’ve found that the best way to do an efficient EVP session is to set guidelines in advance. The first person asks as many questions as they want, before passing it to the person on their left. By taking turns, we never talk over one another, and it gives everyone a chance to participate.  I turned on my recorder.

Before I could begin to speak, I began hearing the sound of voices nearby. I paused, and asked the others if they also heard it. I wouldn’t know until later, but I recorded a very poignant EVP.

“I hear voices. Does anyone else hear that?” I asked.

During the break between my sentences, a ghostly voice says, “I hear annoyed.”

We all sat quietly for a minute, but couldn’t hear anything. After a while, I pulled out my flashlight. While I’m not a huge fan of using a flashlight as an investigating tool, I will admit that it has its advantages.  Sometimes it comes on instantly when a question is asked. It also gives everyone something to focus on during the EVP session, keeping them both entertained and quiet as they watch the light.

“If there is anyone here with us, can you turn on the light?” I asked.

Almost immediately, I felt something whoosh in from the forest behind me. It felt like a small comet of cold air, blowing into me with a force that sent my hair flying in front of my face.  I jumped up from the bench, startled. As everyone goggled at me, I laughed, embarrassed to be so easily alarmed. Some fearless ghost hunter I was.

“Was that a bug?” my friend Melinda asked.

“No, I just heard something behind me,” I said, embarrassed at my jumpiness. What I didn’t realize, was that I had a very good reason to jump from my seat. The whoosh I felt wasn’t a cold breeze, it was a ghost. And he had a message for us.

“Go away!” he hissed, right before I jumped up from the bench.

(click on the link to hear the actual EVP)

After composing myself again, I sat back down and asked  a few more questions, which went unanswered. I turned it over to the next person in the group, and sat quietly until everyone had a chance to ask questions. No more EVPs were recorded until we got up to move to the grave.

According to the psychic mediums I’ve spoken with, people are supposed to move into a white light when they die. The ones who chose not to cross over are often confused. Some don’t even know they are dead.  I knew there was a ghost nearby, because my ears were ringing, like they do when I feel a ghostly presence. 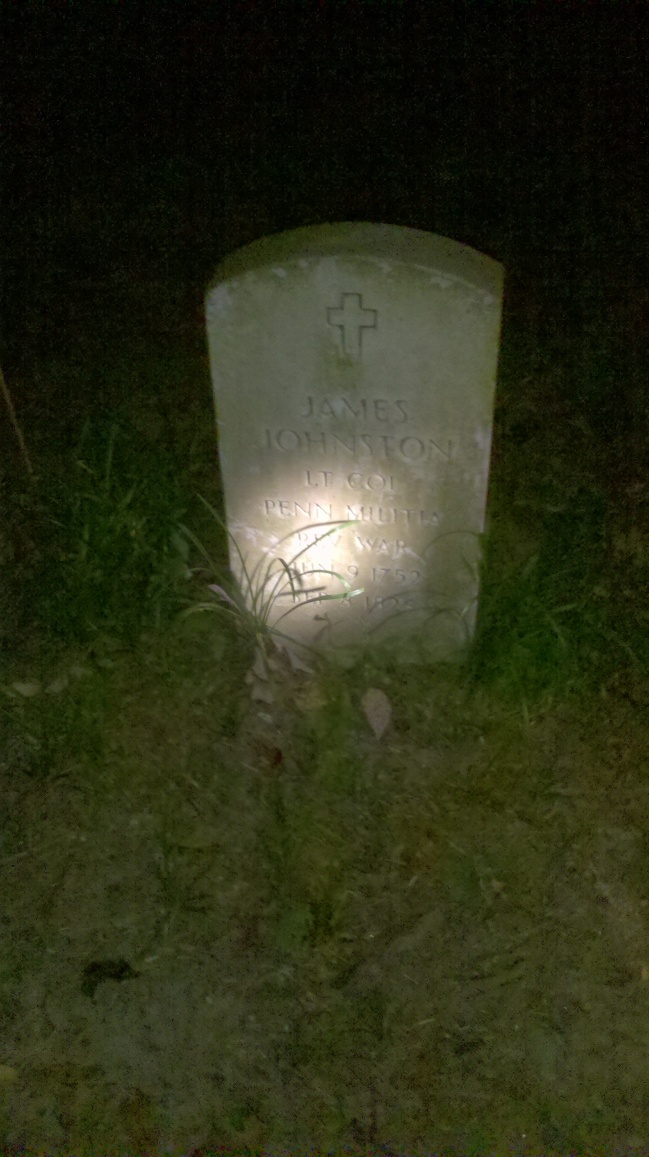 I began talking about the white light. As my words came out, they almost sounded like a prayer. I told them that the white light was a place of peace and love, and that their families were waiting for them with open arms. I encouraged them to look upwards to see if they could see the light, and to then pass through it to find the solace and redemption they deserved.

As I finished, I promptly stepped backwards and nearly fell in a hole.

When I’m nervous, I can’t always count on my emotions to follow the rules. Sometimes I laugh when I’m afraid, and this was one of these times. As I giggled, you can hear a very distinct response. The most interesting thing about it is the accent. It sounds like it comes from someone with a very strong Southern dialect.

(press the link to hear the actual EVP)

We spent a few more minutes there, paying our respects to the fallen soldier before heading back up the path to our cars. The full surprise of what we witnessed wouldn’t present itself until later, when I listened to the EVPs. Then, the full story was told.

I think there were two distinct entities in the woods that night. One wasn’t happy we were there. He swooped in from the very woods to deliver two messages he hoped would chase us away. The other was from a very kindly voiced man, who we hope took our advice and moved into the light.

Was the angry ghost the one who is known to haunt the Purple Head Bridge? It’s not something we’ll ever know for certain. As I left Indiana and headed back to my home in Massachusetts, I spent a lot of time thinking about it.

I hope they both found peace.  I really do.