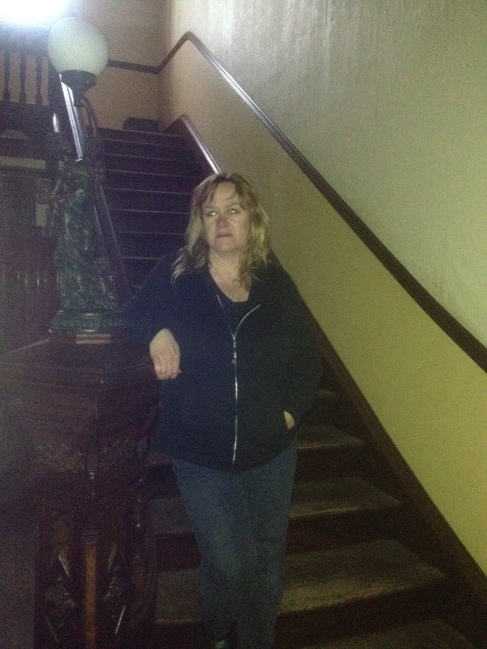 Something didn’t want me to go to the Haunted Victorian Mansion on Saturday.

The first indication came at noon. I was supposed to leave at two o’clock to pick up my friend Mary-Jane, aka MJ, who’d never been to the Victorian before. She was aptly excited after hearing about all my adventures there, which I can’t blame her for. The house has a way of pulling us all in.

I’d been bustling around the house catching up on housework, putting things away that I’d hastily stowed in random places during the hurried pace of the week. I swept, mopped, changed litter boxes, and was starting to gather my ghost hunting gear, when a migraine headache came out of nowhere.  Usually they come on slow, building ever so slightly until my head feels like it’s caught in a vice grip, but this one was instant. It was as though someone latched onto my head, held me by the temples and squeezed with all his might.

Unfortunately for me, I’ve been down the migraine road far too many times. I began getting them at the young age of eight, resulting in years of cat scans, MRIs, X-rays, and other procedures of the seventies and eighties. I have to wonder if some of these tests, especially the ones that sent magnetic rays into my brain, might have triggered my ability to sense ghosts, but that’s another blog for later. I quickly swallowed some extra-strength pain relief, heated up my lavender-infused rice pack, and found a quiet spot to rest until it abated.  By two o’clock, I was feeling substantially better.

I had MJ’s address from earlier in the week, and had even typed it into Google Maps to make sure I knew the general vicinity, but when I plugged it into my GPS, it didn’t recognize it, even though my GPS also uses Google Maps. MJ says this is pretty common for her area and we worked around it, inputting another town that borders on hers. By this time, I was already fifteen minutes late in leaving.

All the way to MJ’s house, my ears were ringing. This isn’t usually a good thing. Being clairaudient, I can hear the sound ghosts and spirits make when they move into my space. A clear bell-like tone signifies a spirit, someone who is usually helpful, like a spirit guide or a guardian of sorts. A static sound is the sound a ghost makes, which is something I don’t like to hear, especially after having lived through a horrible ghost attachment several years ago. When I hear the sound, my first reaction is to bolt. Thankfully, this one was a spirit, but it worried me none the less. It almost felt like someone was sending me an urgent plea to turn around and go back home.

I didn’t have another situation arise until after I picked MJ up. Even though I knew we would need to travel on Route 2 east to get to Gardner, I started driving west.  Maybe it was the lingering effects of the migraine, maybe it was my seasonal allergies acting up, or because MJ and I were chatting. I don’t know, but I drove for ten minutes in the wrong direction before it dawned on me and I turned around.

As I’m in route, I got a call from the owner, telling me he’d be late and asked if I could unlock the door for the ghost hunting group who was arriving that night. I readily agreed, until I remembered that I no longer had possession of a key. I called Marion, the caretaker of the mansion, and made a brief detour to Hubbardston to pick up my key. By the time we pulled up at the door, I was twenty minutes late.

A car was at the curb waiting for me. A friend of the Victorian’s, who saw my post on Facebook, had wanted to meet me at the house to purchase one of my books.  As I was signing books for her and her friend, another car pulled up, asking if I could take them for a tour. This was truly no issue for me. I love giving people tours through the beautiful mansion, watching their faces as they take it all in. By the time we’d finished, the ghost hunting group had arrived, as well as the owner. MJ and I would end up waiting until 10pm before being able to sneak off to do a quick EVP session.

A ghost hunting group had booked the mansion for the night. While the house was large enough to support multiple groups, we didn’t want to be in the way. We waited until they took a meal break and then headed to the master bedroom on the second floor.

The master bedroom is the place where a Finnish immigrant, Eino Sauri, supposedly self-combusted in 1963. I’ve seen his death certificate, which lists the cause of his death as “smoke inhalation from careless smoking”, but I’ve also heard the stories. One thing that has always bothered me was the pronunciation of his name. Initially, we thought he was Portuguese, but later learned from a relative that he was actually from Finland. I asked him about the pronunciation and got a fairly clear response:

The previous night, Marion and Tina, another of the Victorian’s caretakers, had reported seeing curtains move during the night. I was very impressed, but a little disappointed that nothing of that magnitude has ever happened to me. I’ve collected many evps, but have never actually seen anything paranormal happen there. As I asked for them to move the curtains for me, they complied quickly. A curtain near the fireplace began frantically wiggling back and forth for about fifteen seconds. I tried to debunk it by feeling for a draft, but couldn’t get it to be repeated. Here’s the evp I captured during this time.

I sat back down and asked a few more questions. One thing that was on my mind was how the ghosts felt about me. While I thought they generally liked me, I wasn’t sure. So, I asked them if they remembered me. The response was quite shocking. Two of them repeated my name in a five second period. I ended up getting it one more time as well. I still don’t know if they like me or not, but at least I know they’re aware of me.

We only had a few minute before the team who was investigating finished with dinner, so we hurried up to the third floor to do one more Spirit Box session. I’ve always gotten great responses there. One man in particular always talks to me.  Other known spirits and ghosts on the third floor are a child, and possibly a woman who helped care for the house.

I felt someone come into the room. To me, the tone was consistent with a ghost child.

Shortly afterwards, I felt a much heavier energy come into the room. It felt dark and intense, not necessarily angry, but not something you wanted to mess with either.  The other ghosts tried to warn me he was there.

I started talking to him, trying to draw him out. He’s usually fairly pleasant, if not a bit sarcastic. He was apparently in no mood to be messed with though. When I asked if he was there, he responded with “f#k no!” Then, he made a typical comment, telling the others that they “got some weirdoes here.”

At this point, my ears were ringing with a very high pitch like they had in the car, as though my guardian or spirit guide was trying to get my attention. It was clear she was getting tired of protecting me when I kept putting myself in such imminent danger. I decided to pack up and leave the third floor.

We spent a few more hours at the Victorian so I could interview Edwin about his experiences at the house. I’m writing a book for him and wanted to get more details for the next few chapters. We left before midnight and made our way back to the western part of the state. As I drove, I began hearing the signature tone of ghosts in the car with me.

I brought something home with me.

More than one, as it turned out.